Gentle Readers,  (I just love that old form of introduction - it sets such a nice mood!)

It is always strange to me how when a lot of people are focused on something, their thinking and awareness seems to merge.  It's not exactly a psychic thing.  My husband has that.  He doesn't know things ahead of time, but he has an awareness when something has just happened.  It is spooky and unnerving, and quite real.  But in the Zentangle community, it seems to flourish in a good way.

Several times at the CZT training, we would all be standing around the table looking at the mosaic of all the tiles we had produced at the last session.  Someone would say, "Oh look at that one!  I love it!"  Sure enough, it would be mine.   Then I would immediately say "Oh, this one is my favorite!" and the person would identify themselves as the very artist who produced it.  It was really uncanny.  But it really struck me how we definitely have a connection through our shared passion.

Last week I was sitting at the dentist and started a tile with a "stacked tangle" format, which is basically a striped string.  I don't think I have done one like that before, although I have seen many. So I was startled to see the topic for the Diva Challenge on Monday! This one has my tangle Oybay at the bottom, for which I really need to post the steps.  Watch for that next week. 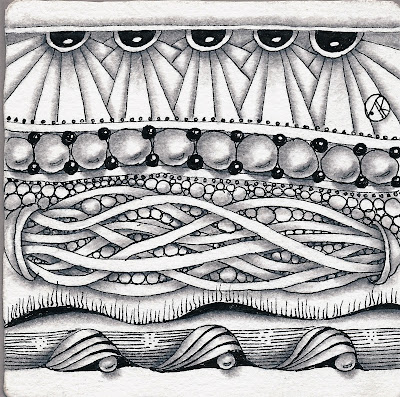 Then I thought, no cheating, you already had this started, so do another one.  I made diagonal stripes and filled in.  I added gold ink to the stripes, and it shows up pretty well on the screen.  My pearl shading is getting better, and I'm starting to think in terms of 3D a little bit.  I like it! 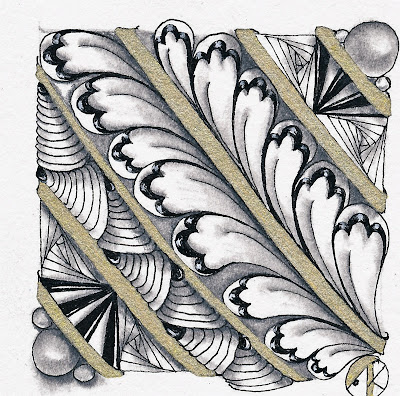 That's New To Me featured the letter "T" and artist Sandra Strait.  I chose Ta-Da, by the lovely Margaret McKerihan, and Sandra's Planateen.   I have not used Ta-Da before, as I found it intimidating at first.  Now that I have tried it, I will probably use it more.  Maybe I'll even do more than one square!  Ha!  Since I live where everybody's - I mean EVERYBODY's roof looks like Planateen, I decided to color it.  I used Inktense pencils and had fun with this one! 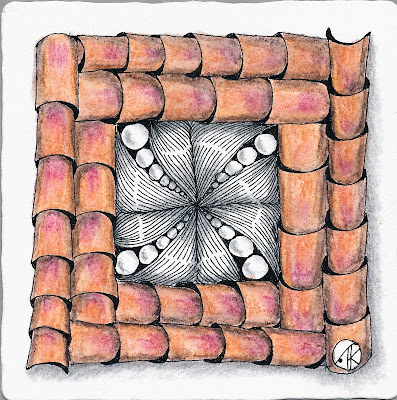 Square One: Purely Zentangle focused on Opus this week, which is another one I rarely use because I just never seemed to get it.  Now that I did this one, Opus may appear more often in my work.  I saw many lovely interpretations on Facebook, which does inspire me. 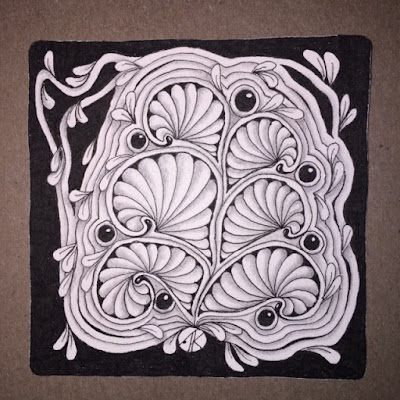 Beyond that, I just had a little fun with a few tiles just because.  The wobbly Tour is a Bijou tile, Mooka shares space with some leftover Zenith... and I did a deep ocean Narwal.  It's very dark down there! 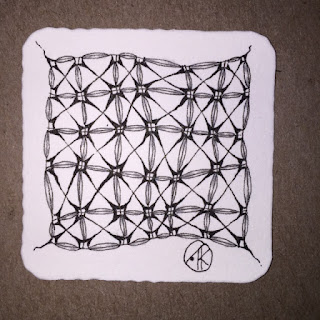 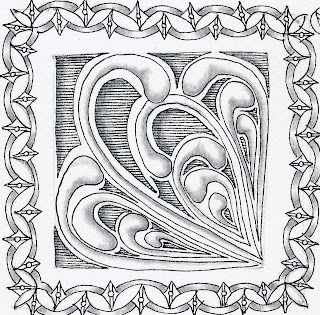 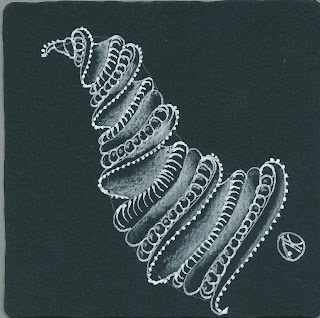 So, another tangled week!  I will attempt to view and comment on everyone else's work, but I may not make more than a few this week.  My husband and I will be busy taking a "staycation" this week, hitting as many restaurants and fun spots in our local area as we can.  We had a vacation planned to Sonoma County, but the place is, sadly, on fire.  This is the second year we have had to cancel a trip there because of the terrible drought and the resulting fires.  Keep those people in your thoughts and prayers as the brave firefighters battle to keep them safe.  Here in Arizona, we are still grieving over the nineteen firefighters we lost in a similar fire a couple years ago.  We humans are a puny nothing in the face of nature's fury.

Be safe, count your blessing, and tangle!