It is 1977, the hubby and I have managed to get a babysitter and are out for a rare date night at the movies.  We rarely do so, and it is partly because moviegoing has become so depressing.  Everything is Rated "R" or nearly "X", even the comedies.  "Family" films are animated or just plain silly boring claptrap.  Off we went to see the latest and greatest, expecting maybe a smutty Sci-Fi.  Whatever, we just needed a movie - NOW!!

Star Wars had us spellbound, mouths hanging open in surprise, wholly entertained and delighted. What?  This was a movie a grade school kid could enjoy, but mom and dad would love it too! Intelligent, exciting (Remember the flight into the mothership?  Whoa!), and funny - what more could you ask?  It was the beginning of a new era in moviemaking, and high time, indeed.  Can you believe it is 38 years later and the franchise is still going strong?

In the ultimate testament to the place Star Wars holds in all our lives, we find that the National Cathedral in Washington, D.C. has as one of its gargoyles the head of Darth Vader.  Yes, the Cathedral is a real operating church, not a set or theme park.  It is the place that welcomes distinguished religious figures from around the world,  where memorials are held for public figures, and the place where Dr. Martin Luther King delivered his final sermon.  Yes, this venerable place of worship, that features tributes to our Nation's Founding Fathers, includes in its design a character that has become deeply rooted in our culture.  Don't you love it?

So, here is my take on this challenge.  We are to include the UMT 'Brella, a fairly new Tangle that I just love!  We have the option of bringing in the Star Wars theme (why wouldn't you want to?)  I don't know if mine is exactly Star Wars or Pigs in Space with umbrellas, but here it is.  I used a black Zendala tile with 'Brella, Star Map and Starwarn. 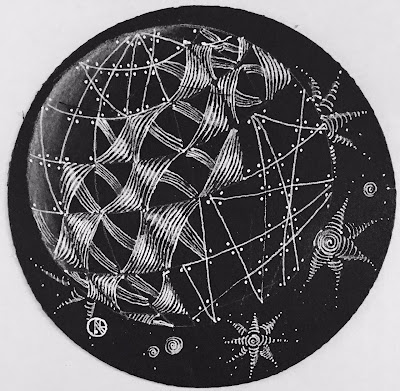 I also did a take on "That's New To Me"  Week 15.  We were to choose tangles beginning with "W", and also include any pattern by Tangler Anne Marks.  I chose her pattern "Camelia", but set it free from its grid.  I added the pattern "Wired" by Suzanne McNeill. Wired Camelias - like a prom corsage! I think the two were enough for one tile! 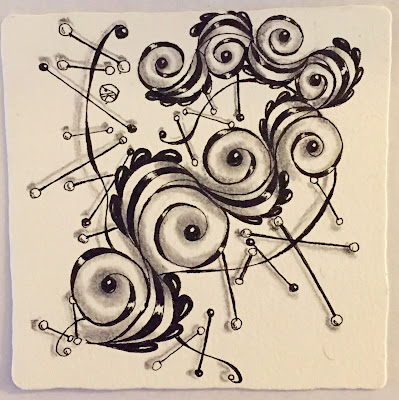 My scanner is down, so the photos are from my phone - hope they show well enough.

Thank you for stopping by and for your comments.

Antonine
Posted by Antonine at 5:24 PM