Antiquities have been in my musings this week for a variety of unrelated reasons.  These thoughts seemed to gel into an ongoing pattern yesterday when I saw two things.  One, was a posting on the Facebook page Shading Zentangle.  It was from Terry Landeck-Cardinal, and showed a beautiful tile that looked like an ancient stone with Zentangle runes carved into it.  I hope you can see it from this link, as it is stunning.  https://www.facebook.com/groups/shadingzentangle/1679239092342635/?comment_id=1679277585672119&notif_t=like&notif_id=1460612946042671
I was so taken with that piece, and of course, now must pull out the watercolors and try this technique...I digress...already...

The second was an article I read online about recent speculation that Scriptures may have been written centuries earlier than previously thought.  Not that the stories are older, but that the writing down of what had been preserved by oral tradition happened sooner than scholars thought.  They based these new theories on what are basically grocery lists!  Apparently, they found lists issued by supply masters in early armies outlining what they requested for the troops' needs.  Two jars of olive oil, flour, and most importantly :-), how many jugs of wine they required.  (more about wine later in this post - surprise!)   The researchers were impressed by the fact that these normal military guys - not elite scholars - were fully literate, indicating that written education must have been widespread at the time, somewhere around 600BC.

I have been exploring some larger ZIA work on 11x14 sheets of parchment.  This one has a few swashes of gouache in colors straight out of the tube, which I thought had an old-world look to it.  When I finished, I just kept thinking it reminded me of some Colonial era manuscript. 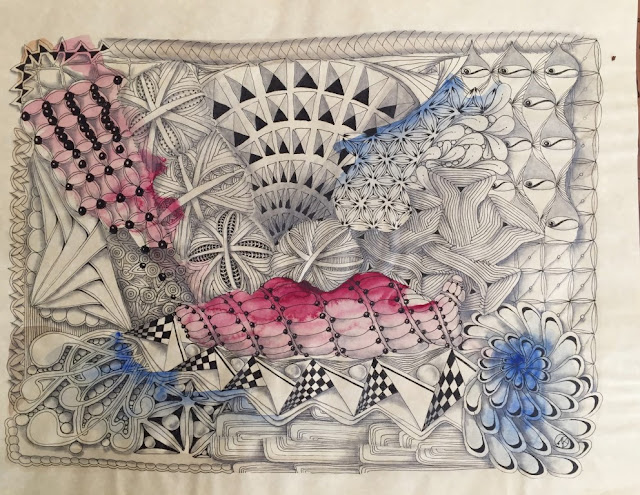 I enjoyed playing around and learning a bit about the properties of the paper, color and ink together.  I still have much to learn about all these materials that are new to me.  The paper is so very nice to draw on with ink.  Everything looks so delicate.  The wrinkles frustrated me, but I actually think it adds to that look of antiquity.  So be it.

I also have been fascinated lately with old maps.  The mapmakers included delightful images of animals (LOVE the whale!) and ships in their work, along with delicate coloring that hinted at the landscape.  Here is a detail from one old map of North America.  I learned a new word here, which is "Septentrionalis".  It denotes a northern area that is largely unexplored.  Conversely, "Meridionalis" similarly refers to a southern region.  Just a couple more things to add to what my daughters refer to as my vast treasure trove of useless information! 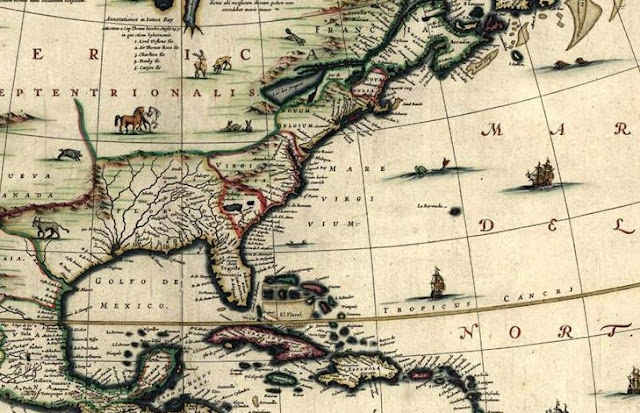 This brings me to the Diva Challenge this week, which employs a globe grid.

DIVA CHALLENGE #263 - GLOBULAR GRID
I did my first attempt at this challenge on one of the hotel coasters I brought back from my last trip.  It is slightly smaller than a Zendala tile, but it was at hand and I was too lazy to leave my comfortable chair and retrieve the official materials.  Here you can see the size comparison. 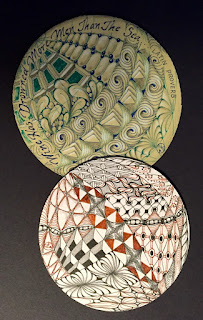 I found this an opportunity to try out some of the "Reticula and Fragment" concepts I have been reading about in the new Zentangle Primer book.  Once again, I learned as much about the materials as anything.  Coasters do just what they are designed to do - drink up liquids!  They are nice to draw on, but have an extra pen handy!
Here is a large image of that first tile.  I used black and brown micron and graphite for shading.  I love the concept that if you fill in the fragments in different directions, you get a new metapattern.  It also was weird to squeeze some of the fragments into the distorted reticula formed by the globe.  This was fun! 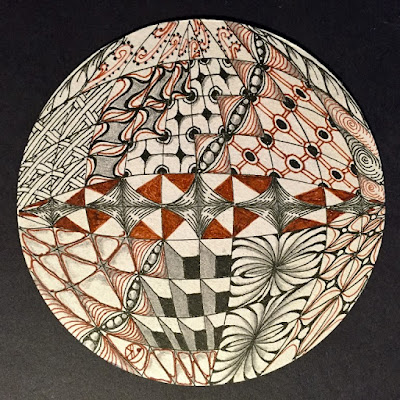 The second tile brings me back to that antiquity theme.  I have been wanting to do some more wine themed ZIA pieces, and I have a little book of quotes about wine.  When I saw this quote: "Wine has drowned more men than the sea", I just kept thinking about those antique maps with the little images of ships.  Imagine one with a wine colored sea and little sailors drowning in it!
Instead, I did my grid with blue and green micron pens on a Renaissance Zendala tile.  Some of the fragments shown in the Zentangle Primer book reminded me of ships, so I went with that idea and created a fragment of my own. It is actually based on one featured in the center of the tile shown above.  I just kept them all going the same direction here.  I tried to add more Nautical type fragments - crashing waves and ship's wood paneling. What I like about this one is the sort of carved wood effect that the shading and highlighting gives these fragments. 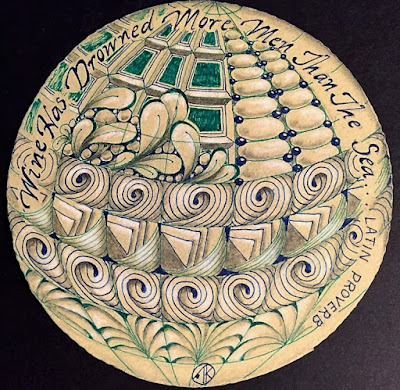 SQUARE ONE FOCUS - CRUZE  It was a short Cruze, but they had a fantastic pastry chef!
Once again, I end up with something that reminds me of food.  I started this tile thinking of ways to enhance the pattern with shading and rounding, embellish it with border treatments, provide some visual contrast.  Instead, I just ended up sooooo tempted to draw in a fork! 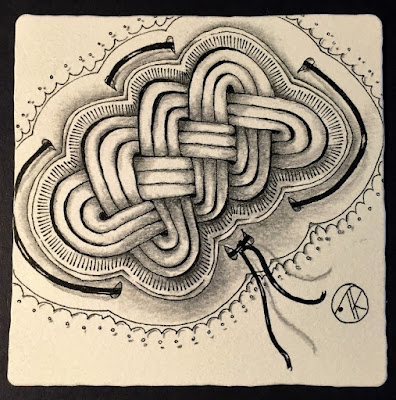 So, Gentle Readers, thank you for stopping by today.  I hope you enjoyed my ramblings and perhaps will begin to see inspiration for your work in equally random sources!  Know that I cherish all your thoughts and comments.
Namaste,
Antonine
﻿
Posted by Antonine at 9:13 AM