This post is hitting the air late, but I didn't want to skip altogether again.  I had fun this week, and want to record it all!

KITCHEN GADGETS - I am the gadget queen! 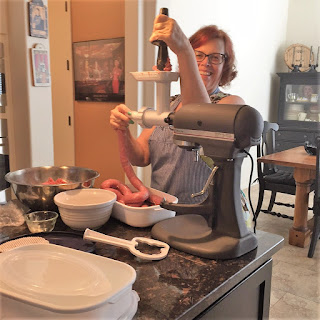 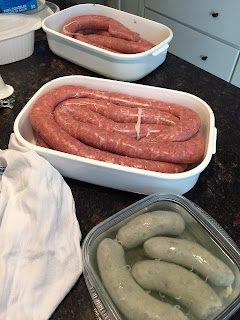 Over the past year or so, I have been updating my storehouse of kitchen wares.  Amazon LOVES me!  I started by necessity - my trusty Cuisinart food processor circa 1987 jammed.  The chopping blade is stuck in place and will not come off.  I have tried soaking, robo-grip plyers, steam, running it with water in it, etc.  As (bad)luck would have it, I had just purchased a series of new slicing and grating blades to the tune of over $100.  The motor is as strong as ever, but now it is pretty useless, as I don't feel comfortable with cleaning it without being to disassemble it.  So - I bought a new machine that fits the blades I just bought.  It is good, but I must say I agree with all the web commenters who advised if the old one still works, hang on to it!  Oh well, the new one works for me.

Next, I received a new Vitamix blender from my loving (and food loving) hubby!  What a wonderful piece of equipment.  Did I mention that both the New Cuisinart and the Vitamix are a lovely cherry red color!  My favorite kitchen accent in my black and white space.  Nice!

Up next, I bought an accessory kit for my other trusty friend, my 1987 Kitchen Aid stand mixer.  This kit has food mill, grinder and sausage making tools.  My husband was VERY anxious for me to fire those babies up!

Finally, I bought a stove-top pressure cooker.  I haven't had one of those since my grandma's exploded and spewed spaghetti sauce all over the ceiling.  My heart still pounds whenever I think of that day!  It literally blew a hole in the top of the pot and the metal lodged in the ceiling like shrapnel!  Yikes!

So...this week I finally pulled all the ingredients together, unfroze the casings and bought two pork shoulder roasts.

Not wanting to waste any of that goodness, I trimmed and cut the meat, saving the excess fat to make fresh rendered lard and cracklings.  The lard is in a jar in the fridge now and the cracklings are salted and just waiting to be baked into cornbread.  So decadent and yummy!  I left a bit of meat on the bones I cut out of the meat and roasted them in the oven until nice and brown.  Then I put them along with a little olive oil, garlic and San Marzano tomatoes and other chopped canned tomatoes into the new pressure cooker.  In 40 minutes, (plus cool down time) I had the spaghetti sauce we always called "red gravy" that used to take half the day to make!  I had already pulled out my hand cranked pasta machine (another fun gadget)  a few days earlier and made fresh linguini, so we were set for a feast.  It was...

Now, on to the most important thing.  I ground all the meat twice, and reserved about two pounds for Swedish Potatis Skorv - potato sausage.  I have never eaten that before, but the Mister has been clamoring for it for some time.  I boiled and ground potatoes, ground a couple big onions (if you think SLICING onions makes you cry, try GRINDING them right in front of your face!)  I mixed that all up with spices I would never think of for meat - allspice, nutmeg, mace, sugar, and let that rest a while in the fridge.  I stuffed it into the casings - a project not for the weak-hearted.  A number of online commenters said they had problems with the food pusher that came with the grinder when it came time to stuff the casings.  Being a gadget queen, I dove into the cabinet and pulled out the black pusher that came with my new Vitamix.  PERFECT FIT!  It worked much better than the vilified white plastic Kitchen Aid pusher, and saved the day! Once the Swedish sausage was formed into links, I put a few into a container of salted water to hold them, per the online tips I found.  The rest went into freezer bags immediately.  The next day, I boiled the refrigerated links in some chicken broth, then sautéed them briefly in butter - again following online instructions - and WHAT A TREAT!  I was an honorary Swede for a day!

The Italian sausage was very basic and done the way we did it at home years ago.  Mix the meat with salt and pepper, red pepper flakes, fennel seed and some water.  I had about eight pounds of meat for that, so it all went into a big bowl in the fridge to marinate over night.  We have only eaten a tiny sample of that so far, but it was delicious.  I am more confident about that, as I know what to expect.  It all went into freezer bags awaiting future mealtimes.  I have a party coming up and some will be cut into little chunks for appetizers.  Can't beat that!

So now that I have bored most of you to tears - unless you share my obsession - it's time to move on to the more artistic pursuits...

I was anticipating receipt of my 14 Shades of Gray kit when this challenge came out, so I decided to warm up the graphite in alternate stripes.  Here is my tile with  Paris, 3D-Room and OVY alternated with Printemps, Hibred, Zenith and I don't remember the name of the leafy on down the center.  No prizes here, but it was relaxing and fun. 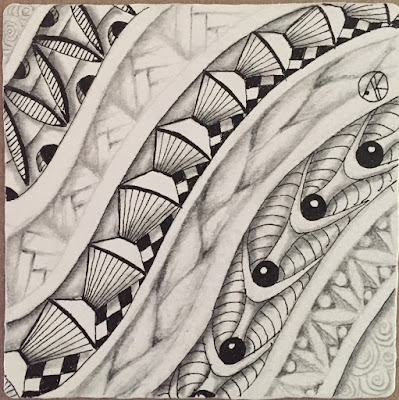 SQUARE ONE - SNAILS
Snails is a tangle that I just discovered a couple weeks ago when I was reviewing my Zenthology files from CZT training.  I have been playing around with it a bit and think it is pretty cool.  However, when I tried to feature it in a tile, I just couldn't get anything interesting to happen.  Then I pulled out the sketchbook and just started making spirals in a very relaxed and loose way.  I used my whole arm and went fairly quickly.  That's it!  I know snails are supposed to be slow, but this one was bookin'! 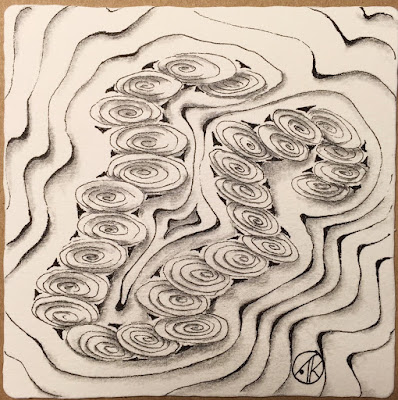 Here is one of the tiles I did a few days before with Snail in it as a "just because" tile.  I also really love the fill for Quandary (which I stole from the Zentangle Primer book...don't tell anyone...) 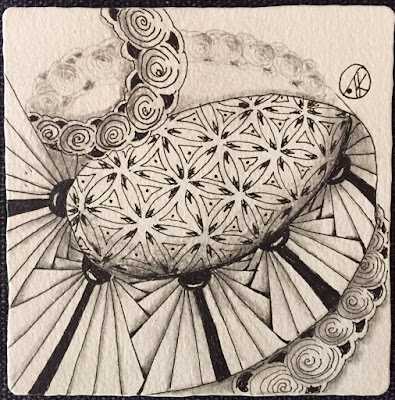 14 SHADES OF GRAY
Here is my first crack at this technique.  I went "by the book" and followed Sonya Yencer's excellent instructions for Jetties.  I am anxious to try it out on other tangles. 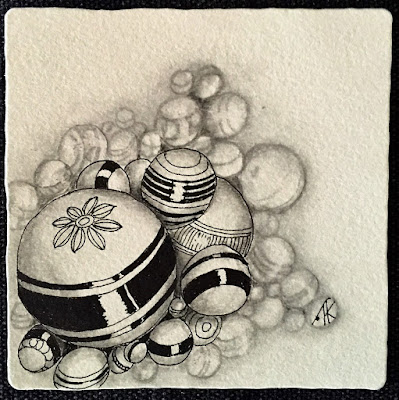 So, Dear Readers, that is all I have this week.  Next week I hope to add a bit more color, but this week it seemed "meet and right so to do" to keep it black and white (and gray).
Thank you for stopping by, and know that I cherish all your thoughts and comments!
Namaste,
Antonine﻿
﻿
﻿
﻿
﻿
Posted by Antonine at 2:09 PM