New Oven Coming Soon To A Theater Near You!

My oven that was part of our construction package (which I have complained about to my "I-can't-hear-you" husband since 2011) has finally had it.  It never did maintain a very consistent temperature and the racks were not level.  We initially had the service people out to recalibrate the temperature, but not much improvement so we gave up.  Casseroles and roasts were OK, but baking was a tricky adventure requiring a hanging thermometer and rotating pans.  Cake layers were always lopsided and had to be stacked opposite and spackled over with a bunch of frosting.

This time, though, it finally gave out and hubby had no choice but to prepare for an expenditure.  I was broiling two burgers - just two.  It should have been easy.  One came out of the oven a perfect medium rare (the one I got), but the other was pretty much raw and running blood all over (he was the unfortunate recipient of that one. Then the oven turned off OK, but the light would not turn off.  Also the exhaust fan that comes on after the oven is off didn't make its usual appearance.

Our regular appliance repair guy, who has seen us many times over the last eight years, showed up and we thought all would be well.  Well......no.  The parts to repair the touch panel, the temperature control thingy and the exhaust fan would have been over $1,300.  Do we really want to sink that into an eight-year-old oven? (Which I never liked, but don't overplay your hand, girlie.)

Off to the appliance store - yay!  I knew from the start, and from a bit of online research, that the one that would satisfy me and allow me to make proper macarons would be the Wolf.  I liked the M Series, not the full blown Pro, but the upgraded version of the Wolf lineup.  Then of course, there is the matter of the matching microwave.  Can't have top and bottom go together like stripes and prints, right?  When we first approached the sales guy, he pointed us to another brand, indicating it would be "the best".  When I said "does this provide even cooking temperature?", he stepped back and said, "uh...I think you need a Wolf."  Yay - so I didn't have to say that to hubby, the guy said it for me!

Then he directed us to the E series, which is OK, but I thought maybe that's the best I'll be able to do here today.  I didn't see any models between that one and the Pro, which wouldn't fit in our available space.  Also, the microwave they showed was only that - no convection.  My biggest regret with my existing microwave is that I could not figure out how to use the settings for the convection.  My friend, who is a great cook, said the same thing.  After more discussion, and after mulling over my remarks to the sales guy, he said "I think you need the M Series, and I'll check on the combo microwave."  (Yay!)  He led us to another area where the ovens were installed under-counter, but were the same wall ovens.   I loved everything about the M oven, and we had good news about the micro combo oven.  My husband uses a wheelchair, and good thing he has long arms, because the pull down door on the microwave makes it difficult for him to access.  'Cause he has to, you know, heat up his coffee (the one great thing about my current micro is the Reheat Beverage setting) or maybe make a packet of oatmeal.  That's the extent of his cooking.  But the Wolf combo oven has the old style push button door that opens to the side.  He's going to love it!

My other bucket list item was instruction on how to use the features.  Our charming salesman provided us with information on available classes at an area showroom.  Just what I need.  So...

Yay, the oven should be installed in about a week, and I'm ready for new cooking adventures!  So for a short time I either need to cook stovetop, which I have done a lot of given the deficiencies of my oven, or I finally figure out how to use that convection thing that is headed to the scrap pile soon, or we eat out.  I can do that...let's all say WOLF, WOLF, WOLF!!!

Next, that refrigerator that, even after two repairs, still has condensation pooling under the produce bin and the most stupidly designed ice maker I have ever seen.  I'm willing it to get even worse just to make my point...

I have made many stuffed peppers over the years - just for me, mostly, because my girls were not fond of them, especially Alison, who runs in terror from peppers and/or onions.  My new husband, who is not always crazy about Italian style stuff, is actually a stuffed pepper lover, so YAY! I was taught to use a green pepper, make the filling with sautéed ground beef, add Parmesan cheese, eggs, breadcrumbs and seasonings - parsley, oregano, fennel seeds.  Fill the pepper, brown the outside in the pan, stand them up in a covered casserole with tomato sauce and bake.

This time, I followed similar steps, but with a major flavor difference.  My husband asked why I don't use rice in the filling like most he's eaten.  Well...breadcrumbs is the way we always did it.  But in the spirit of trying something new, I headed for the pantry for rice.  I had a jar of that  brown and white blend you get in the grocery store - Tex something.  I like the texture of that, so check that.

The peppers I had were red, but still had some green in them.  Sweet, but still nice and firm.  Excellent!  I put them in the frying pan to brown without the filling - new approach.

I had ground beef to use up, but had I planned this in advance I would have used lamb.  I sautéed garlic and onion, added the beef and about a teaspoon of Baharat Arabian style seasoning.  I chopped four dried apricots, tossed in a couple tablespoons each of raisins and pine nuts and a little fennel seed.  Holy man, I would make that filling all by itself and sit in a corner with a big spoon if no one was watching!

Meanwhile, I started the tomato sauce in a pan with some garlic and some Ras al Hanout seasoning for a tiny bit of kick.  Let it simmer for about 20 minutes or so.  When the peppers were browned a little and pliable, I stuffed a ton of the rice filling in.  With the other type that has egg in it, you can't fill too full because the egg expands.  This type is OK to pack it in.  I put the peppers in a pan with a lid that can go in the oven, poured the sauce over it, and put it in at 350 degrees for 50 minutes, then took the lid off for another 10 at the end.

My hubby chose a beautiful bottle of Nebbiolo for dinner, which we started at the fire pit outside while the peppers were in the oven. So nice!  We wandered back to the dining room when the dish was done and polished off the bottle with pleasure.

Next time - lamb in the filling...


Amp Up Those Tater Tots with Condiments and a Wine Pairing - Really!

Yesterday I numbly stumbled to the freezer about an hour before dinner with that ohno what can I make tonight look.  I usually look forward to planning and cooking a nice meal, but that wasn't the day for it.  If I were still single, it would have been crackers, cheese and wine, but now I have a lovely husband who needs an actual meal.

OK, here is some frozen ahi tuna with a recipe on the back for a marinade.  Soy sauce - check, orange juice - check, ginger (chunks in the freezer) - check, garlic - check, molasses - check.  Microplane that ginger and garlic, add the rest in a bowl and good to go.  Haul out the cast iron griddle pan, pop the fish steaks in the plastic into a bowl of water to thaw and then move on to the side dishes.

Ummm...half a bag of frozen sliced carrots.  That will do. Skillet with water, butter and a drizzle of honey.  Easy-peasy.  So far so good on this what-to-make dinner.

Now, the thought of that tuna with lovely Asian marinade and ketchup on the side just didn't make me smile.  To say the least.  So, thinking cap on, what can I do to make this better? 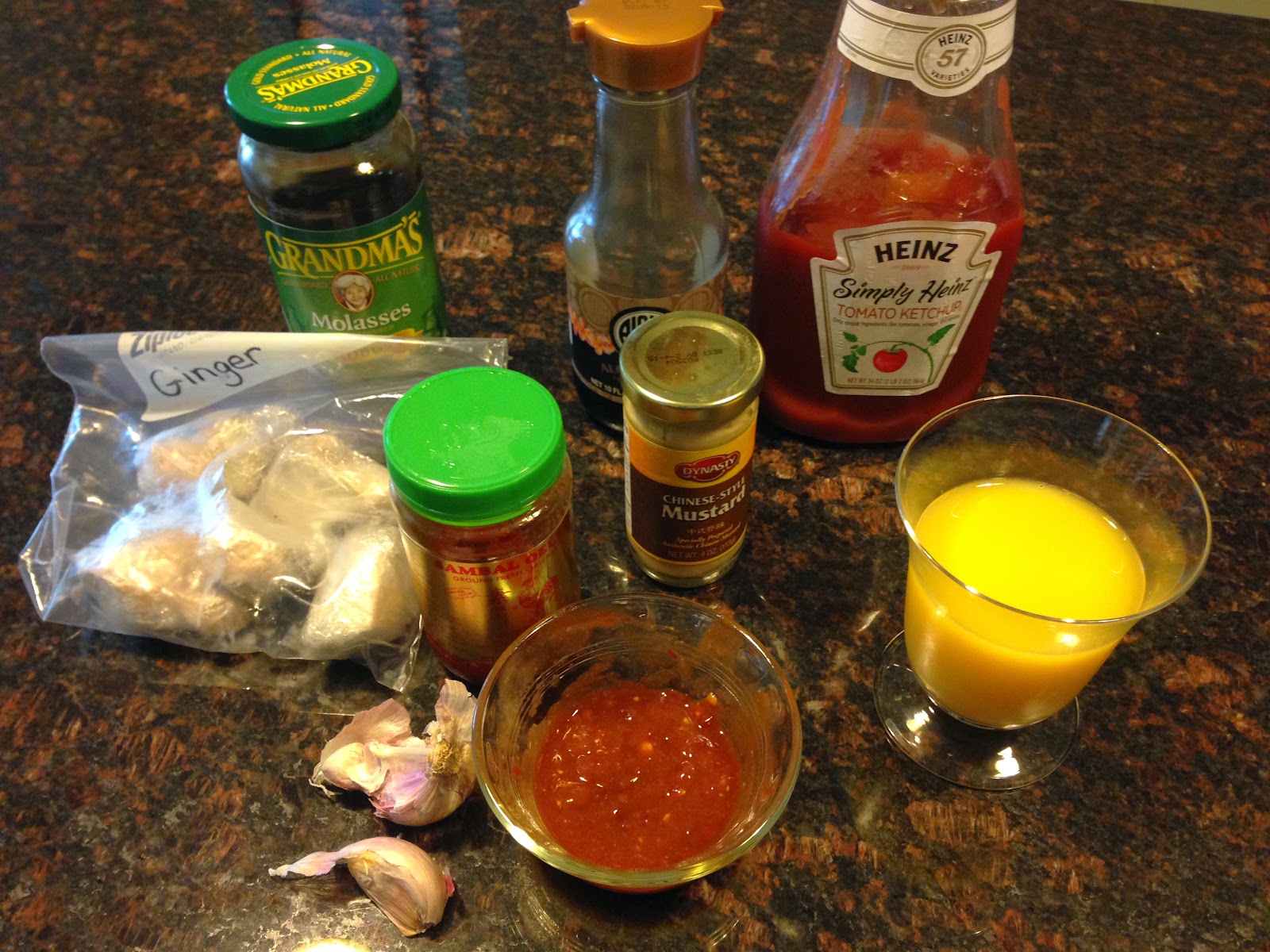 I took a little of that marinade I had for the fish, added some Heinz, a little more molasses, some chili paste and a little blob of Chinese mustard.  Stir and hope for the best, right?  O.  M.  G.  I would serve this to the Queen!

Hubby had opened up a bottle of Albarino  brought back from Europa Village,  a Temecula, CA winery we really like.  I offered him a finger-dip of the sauce.  Mmm, good!  Then he took a sip of that wine and his eyes popped wide - WOW!  Apparently I had just hit on the perfect wine pairing too.  I tried the wine and red stuff together and had to agree - absolutely true!  I will definitely look for other ways to use that stuff - it's too good to make once and forget.

Dinner was delicious and on the table in about 45 minutes - not bad!


August 2014
One of the things I now have time for (yay retirement!) is expanding my cooking skills.  Living in Arizona, I find, as you would imagine, more emphasis on Mexican/Southwest ingredients.  I am learning more about that, but have also found that both my husband and I really like the other three M's - Mediterranean (Italian and Greek, mostly), Moroccan, and Middle Eastern.  To stick with the M theme, we have a Meyer Lemon tree in the yard, and pie with loads of Meringue, fits the bill nicely.  Now that I have this handy-dandy blog set up, I can keep track of the fun things we cook and eat.

On the beverage end, we both love wine - in fact that's how we first met.  Our first date was a wine seminar five years ago featuring Spanish wines, and we have never looked back! I plan to chronicle our adventurevino in the future.

What a good way to remember and share life's most essential pleasure!

View my complete profile
Thank you for visiting! I read and happily accept your comments. I'm grateful that you take the time to share your thoughts with me. Peace!