So last week I was obsessed with Black Tiles, and after experimenting and practicing for a week on that, I feel much more proficient with them.  I'd say we have become friends!  At the end of that post I speculated that my next love would be Bijoux.  Surprise!  Guest blogger Holly Atwater provided three audio meditations designed for Bijou.  How fun!  Everything else came to a screeching halt while I plugged in and tangled.  My poor husband made several attempts to "contact" me, but even he, of the legendary patience, finally gave up.  Oh dear...

Being Literal Girl means I followed directions and did not stray into unauthorized creative territory for these three meditations. So here are my results - all nicely accomplished in straight-up orthodoxy. I could have jazzed them up some, but I think they are beautiful as a little series just unadorned.  Zentangle basics! 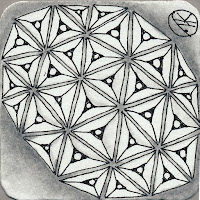 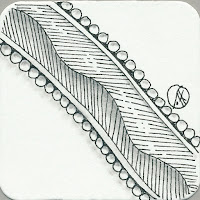 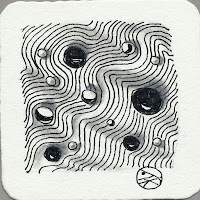 I also had done two other Bijoux earlier.  One is an exploration of Florz  (did we sweep some stuff under that rug?)  and the other is a "mistaken" attempt at Mambo, which Margaret Bremner brought to our attention in last week's challenge.  In typical Antonine fashion, I misread the stepout and curved the fill lines in the wrong direction.  I love what happened!    See how that works? 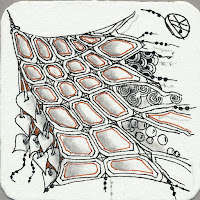 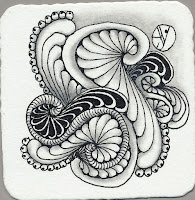 The other half of Holly's challenge was to use Betweed.   I had this great idea that was so relaxing and fun to draw.  The result, however, looked better in my head than in execution.  It looks like my patio furniture exploded. Oh well, maybe it needs to grow on me a bit.

For That's New To Me, the letter was "P".  Yay!  Lots of new tangles from which to choose!  I used fellow CZT 19 pal David Hunter's Pin Bawl, Ai Ling Hung's Pand and Christine Reyes' Pax. I truly enjoyed this one!  I did have a little "oops" moment there, but in the spirit of an Amish quilter, I view it as a mark of humility and leave it in. Plus, it is in the shade, so perhaps you won't see it, right? 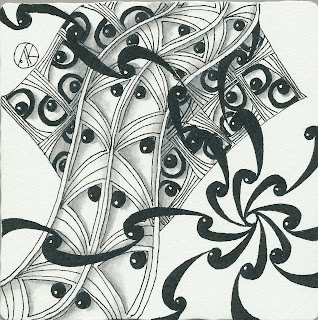 The Square One: Purely Zentangle focus was Windfarm. This is the first week that the focus tangle was not one of the "official" Zentangle patterns.  I got on a roll with this fun tangle from Margaret Bremner and did three tiles. I even got a Facebook comment on one of them from that exceptional Tangler Ms. Bremner herself!  She is definitely one of my all-time ZHs (Zentangle Heroes)!


So folks, this has been a pretty productive week!  Great fun, and tangle on, everyone!

Thank you for stopping by today, and know that I appreciate and cherish all your comments.