Diva Challenge #275 - Give Peace a Chance

There are places on earth with higher violent death by gun rates than the United States: Swaziland, Iraq, much of Central America and Mexico. Of about 35 developed countries around the world that are members of the Organization for Economic Cooperation and Development (OECD), the United States ranks 3rd in gun violence related deaths, with Chile and Mexico topping its numbers, and Israel close behind.  Japan is VERY low, due to its very tough gun control laws.  Additionally, Japan's overall violent death rate by any cause is very low compared to the U.S.  Also low are a number of countries in Western Europe that are classified as social democracies.  I'll not comment on that - you Dear Readers can draw your own conclusions.

The OECD published statistics about a number of societal factors in their member countries.  These included crime rates, perceptions of government corruption, and various economic factors.  The gun violence rate was highest, in order, in Chile, Mexico, United States and Israel.  Interestingly - and a sad commentary - is that economic inequality is also highest in those same four member countries.  They rank, in order, as Chile, Mexico, Israel and the United States.  What does that say about a possible cause and effect?  Perhaps when people feel economically powerless and they have access to guns, they start shooting.  I think it is not only that they lack money, because there are many places where people live with much less money and possessions.  The connecting factor may have something to do with seeing a few people at the top of the heap with such unimaginable riches and then realizing that you will never have a life like theirs.  Or perhaps, in a more sinister scenario, those at the top want to make sure those at the bottom have all the access to guns they want - "let them kill each other".  That distracts the public from what the top tier are up to.  "What a world, what a world..."

As we approach the Republican and Democratic conventions this month, we cannot help but remember the events of 1968.  Racial inequality was a major issue then, just as it is today.  Black lives DO matter - as do Blue lives.  When we see videos of police appearing to shoot black people seemingly without cause, we are shocked and appalled.  But when we understand how frightening a confrontation with an armed suspect is for a police officer, we can see the situation in another way.  Police brutality against blacks and other minorities is unacceptable, but so is deliberate targeting of white officers by blacks in retaliation.  I don't understand those who believe the shooter of those officers was some kind of hero.  I don't understand rejoicing when a black person is acquitted even though the evidence that he committed a brutal crime is overwhelming.  But then, I'm not black, so I cannot see through someone else's eyes.  Of course, many people of all races don't understand how people can be pleased when a white person gets away with all kinds of corrupt behavior.  But I'm from Chicago, and old enough to remember the race riots right in my grandparents' neighborhood and at the Democratic convention in 1968.  Because black people wanted to buy a home "west of Ashland Avenue", because police brutality was rampant, because the government had no solutions.

This year, the Democratic Convention is to be held in Philadelphia, "The City of Brotherly Love", which also experienced riots in 1968.  Our weekly guest Diva Challenge host is Suzanne Fluhr, a tangler and blogger (of a certain age) from Philadelphia.  She has been moved to offer us a challenge to Give Peace a Chance.  She references John Lennon, who composed the song by that name, and then was himself gunned down.  So much sadness.  Suzanne has asked us to reference that theme of peace in  our entries.  I have chosen to follow Suzanne's lead and use tangles that begin with the letters P.E.A.C.E.  I used my own tangle, Paris, a reference to the horrendous terrorist attack that occurred there. I used Eye-Wa, which has such strong black/white contrast. I used Suzanne's tangle, Aloha.  Wikipedia states "Aloha in the Hawaiian language means affection, peace, compassion, and mercy." That seems very relevant to me.  I used Cruffle because of its yin-yang design, reminding us that every force has its opposite.  Finally, I used Eddyper because somehow it reminds me of peace lilies.  I chose not to soften the design with shading, but rather to leave the black and white to speak for themselves.  This tile is a personal reminder to me that we must not ignore violence and hatred, but must work TOGETHER to make all our lives matter. 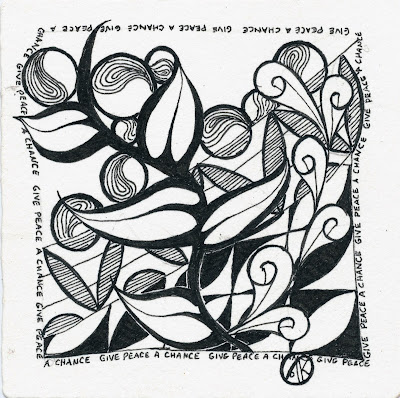 I have done a few other tangle works over the past couple weeks.  Part of why I have not been so active on the boards and challenges is that I have been playing around with calligraphy and dipping my toe into journaling with fountain pen and water color.  Getting the right pens, ink, etc., and facing that blank page with fear of "messing up" is a challenge in itself.  Maybe sometime I will post some of those efforts here, but for now, it's for my eyes only.  Additionally, my dearest and I have been dealing with some medical issues.  We have, thankfully, been able to rule out life threatening circumstances, and now are left with "inconvenient" realities.  We age, life changes, and we treasure each day together.

Here is what I have managed to complete in my Zentangle journey.

So, Dear Readers, that is all I have for now.  Pray for peace.  Love each other and open your mind to the way your neighbor, co-worker, boss or employee sees the world.  Each of us stands in our place with the entire world beneath us and the entire universe above.  But each of us has a different reference point to the earth and the universe.  Let us always remember and respect that.

Namaste,
Antonine
Posted by Antonine at 10:01 AM

View my complete profile
Thank you for visiting! I read and happily accept your comments. I'm grateful that you take the time to share your thoughts with me. Peace!