Our Diva's weekly challenge is to represent Beads of Courage to support the program in which she and her little Artoo are in.  It awards colored beads to kids with serious medical challenges each time they endure a test, a procedure, a treatment or overcome an obstacle.  What a lovely idea with a beautiful memento that grows with time.  Laura is a tireless advocate for her beautiful son and for others who face the unthinkable difficulties that some children must.  Each of us with healthy children and grandchildren must say a prayer of thanks every day and a prayer for blessings on those who are not so fortunate.

When I read this challenge, I was already working on the weekly That's New To Me challenge, and had found this wonderful tangle by Neil Burley called "Decostar".  It takes a bit of time to line everything all up, but is not too difficult to draw.  I thought it looked like an award medal, and decided it should hold Beads of Courage.  I used Prismacolor pencils (gasp, yes I did!) with brown and black Microns and a white gelly roll pen on a Renaissance Zendala tile.  I don't know why the scanner chopped off little bits of the tile, but here it is.  I love the color.  Yep, I do.  I promise to lose that color phobia soon... I just received my "Tints on Tan" kit from Marty Deckel, and am really excited to try that out now! 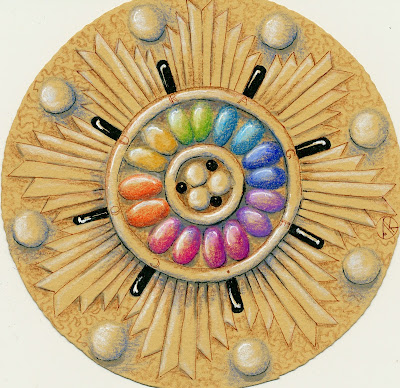 So, back at the "That's New To Me" corral, I still had to use some new stuff.  I had also found Neil Burley's other related tangle, Decodiamonds.  Being the literal person that I am, I just lined them up as shown in the step-out and bordered them with Genevieve Crabe's Demi (wasn't I good to use a tangle of hers that also started with a "D"?)  I love how that tangle self-shades and is so bold.  I think I'll be using that one again!  When I got the Deco things in place, I first added the interior "panel" and tried some major shading to give it depth.  I didn't like it, so I did the bad thing and erased the shading I had started.  Then I realized they reminded me of folded tuxedo shirts and I added the buttons down the front.  The minimal shading I added is to represent the pin-tucked feel of a crisp white shirt.  Really, whoever invented the whole tuxedo formal wear look for men really understood what makes a man look amazing, I must say.  Uh, Honey...don't you want to dress up for the party?... (hehe) 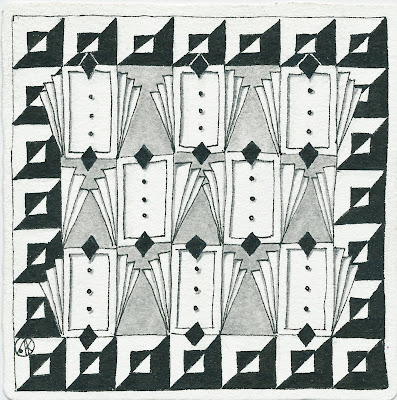 The Square One: Purely Zentangle focus this week is Msst.  The Phoenix area is having an unusual spring and early summer, to say the least.  May was much cooler (how lovely!) than we usually expect, and June has started out to be cloudier and just strange.  Monsoon season starts June 15, but this year we had the earliest June rain (on the 5th) in history.  Plus, you understand, Monsoon is not about rain, but about wind and dust.  So this is a strange year.  I stylized my Msst and added some mountains and a river wash.  I never used that River Stones tangle, but after I watched a video on how to draw it (the RIGHT way), now I love it!   Normally I don't do such landscape-y things, but this one I like.  After four years living out here, I am finally starting to relate to the surroundings instead of feeling like I am on some other planet.  I still miss peonies and lilies of the valley and loamy black dirt.  Oh well!  I have bougainvillea and olive trees.  And Mountains! 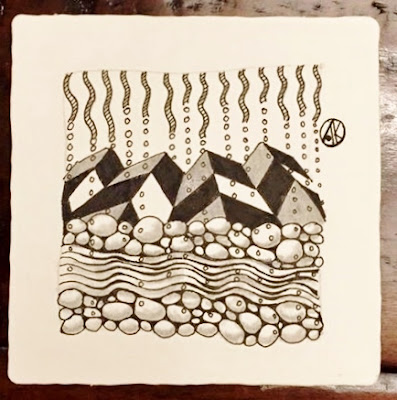 So, thank you for stopping by and for your thoughts and comments.